Shounen
Black★Rock-chan (ぶらっく★ろっくちゃん, Burakku★Rokku-chan) is a 4-koma series which features both a super-deformed version of Black★Rock Shooter and her antics with Dead Master. It has been released on the same day as the browser-based game Puchitto Rock Shooter and is serialized in the inaugural issue of the 4-Koma Nano Ace magazine published by Kadokawa Shoten between March 2011 and February 2012.

The Otherworld is considered to be a unusual place where battle never ceases. Among the inhabitants of the Otherworld are two beings: one who wishes to destroy the balance, and the one who strives to protect it.

However, on this side of the Otherworld, things are different.

Black★Rock-chan focuses on an unusual relationship between Rock-chan, the protector of the balance of the Otherworld, and De-chan, her presumed nemesis-turned-babysitter. 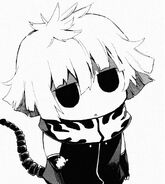