Start a Wiki
This article is about the anime. You may be looking for other uses of Black★Rock Shooter.

The anime series is produced by the animation studio Ordet and directed by Shinobu Yoshioka. The series appears to be heavily related to the concept of the Black★Rock Shooter OVA, which involves two girls whose friendship is tested when they are dragged into an alternate world. The series is released in the noitaminA timeslot and the first episode aired on February 2nd, 2012. The series has a total of 8 episodes[1].

Aside from the OVA characters, several new characters appear in the anime[3]. New human characters include Saya Irino (Mamiko Noto), a school counselor, Kagari Izuriha (Eri Kitamura), a childhood friend of Yomi, and Arata Kohata (Manami Numakura), the captain of the basketball club at Mato and Yomi's school. A new other self named Chariot also appears in the anime. 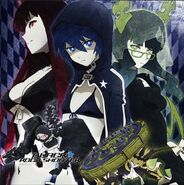 Retrieved from "https://blackrockshooter.fandom.com/wiki/Black%E2%98%85Rock_Shooter_(anime)?oldid=13630"
Community content is available under CC-BY-SA unless otherwise noted.