She is voiced by Kana Hanazawa in the OVA and anime and by Maaya Sakamoto in the PSP game.

Black★Rock Shooter's original design is of a short,skinny, pale-skinned, blue-eyed girl, with black hair in uneven twintails; the right lock of her hair is shorter than her left. She bears two scars on her midriff. A blue flame shoots out from her left eye.

Her clothes consist of a string bikini top under a black jacket. The jacket has a white stripe running along the length of each of her sleeves and has a white star design on the front (left side) and back. She also wears a pair of tight-fitting shorts, gloves, and black knee-high boots.

Her weapons consist of a black-hilted katana later named as Black Blade and a large gun called ★rock Cannon. Although some fans by mistake call her cannon the Black rock cannon, that is incorrect.

The OVA adaptation added some details to Black★Rock Shooter. Unlike in her original design, her eyes have a concentric circle pattern, a trait she shares with other characters in the OVA. She is depicted as being about 156-161cm tall, while her "other self", Mato Kuroi, is 155cm.

Black★Rock Shooter is also given a personality in the OVA. She is depicted as a calm and collected girl, not speaking at all until her confrontation with Mato, near the end of the OVA. She also does not focus on anything except the most important thing she has to do at the moment.

She is shown to be very skilled in fighting, despite being quickly taken down by Black★Gold Saw in her first shown battle. Black★Rock Shooter is able to fight evenly with Dead Master, despite appearing to try not to hurt her.

The manga Black★Rock Shooter ~Innocent Soul~ depicts the titular character with a poncho instead of a jacket to cover her upper body. Also, her ★rock Cannon and Black Blade are merged to form her constant companion, Ron, which comes in the form of a shapeshifting snake around her right arm. When she wears her other counterparts' clothing (jacket, bikini top and shorts) she lacks scars unlike her OVA counterpart.

Black★Rock Shooter (referred to in the game as "Stella") undergoes another change of design at the release of the PSP game Black★Rock Shooter THE GAME. One noticeable change is that she now has a pair of metallic wings and a jet engine on her back portion, which allows her to maneuver through the air and cushion landings easily. Her hairstyle is more apparent to Mato Kuroi, with a more spikier look. Her skin color in game is less pale than her original design and she has two barcodes on her midriff reminiscing the scars of her OVA counterpart. Also, she experiences a wider range of emotion than her OVA counterpart.

Black★Rock Shooter has been redesigned for the anime, with some new elements possibly inspired by the designs of White Rock Shooter and Black★Rock Shooter Beast, as her new jacket and boots (which are now more blue than black) have similarities to both WRS' and B★RSB's clothing. Her sleeves are now double layered, like WRS. She has also been given a double belt similar to Insane Black★Rock Shooter. Like her hairstyle in the PSP game, her hairstyle is more spikier compared to her OVA appearance. like her Manga counterpart she no longer has any scars on her midriff. She wears her trademark hood more often than she does in other media.

Black★Rock Shooter is the "other self" counterpart to Mato, who she reconciles with and helps to save Yomi from Dead Master.

Black★Rock Shooter is tasked with the duty of maintaining the peace within a world between Heaven and Earth called the Threshold.

Black★Rock Shooter is one of the last residents on a dead Earth, joining the last stand of the remaining forces of Earth to fight against beings called the Seven Apostles. She is considered to be the ultimate weapon, whose abilities are the only hope to save Earth from utter destruction.

Prior to or during the beginning of the game, she seems to be in a tube of some sort, and in a state of stasis.

BRS with a chain accesory attached to her belt.

BRS with a closed jacket. She also has no gloves in this photo.

Concept art of B★RS and her weapons

The official artwork for the Black Rock Shooter OVA

Artwork and Details of B★RS 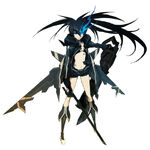 Black★Rock Shooter as seen in the game

BRS's appearance in Lord of Vermilion Re:2

Retrieved from "https://blackrockshooter.fandom.com/wiki/Black%E2%98%85Rock_Shooter_(original_concept)?oldid=13405"
Community content is available under CC-BY-SA unless otherwise noted.