Edit
watch 01:25
Jurassic World: Dominion Dominates Fandom Wikis - The Loop
Do you like this video?
Play Sound
This article is about the PSP game. You may be looking for other uses of Black★Rock Shooter.

"In the year 2032 AD, mankind was decimated. Before she awakes...She becomes an RPG."

Black★Rock Shooter THE GAME is a role-playing game based on the Black★Rock Shooter concept, released on the Sony Playstation Portable (PSP), developed by Imageepoch. The game combines elements of a role-playing games, shooting games and third-person shooter game.s The main theme song for the game is "NO SCARED", performed by ONE OK ROCK. The game was released on August 25th, 2011 in Japan, and in North America and Europe on April 23rd and 24th, 2013 respectively.

The story is set in a post-apocalyptic world, where 19 years have passed since an alien invasion has annihilated a vast majority of the human population. The remaining inhabitants on Earth are given the responsibility of the Earth's safety from the invaders, until the awakening of Earth's ultimate weapon against the invasion.

In the year 2032, Earth suffers from a sudden invasion by alien forces. Nineteen years passed after that event, and with chaos ruling the globe, the only way to rescue the world from utter destruction is to survive and fight against those who force Earth into complete annihilation.

The main character of the game, Black★Rock Shooter (in the game a "living weapon" designated with the name BRS), is entrusted with the responsibility to protect mankind, possessing the abilities to fight against the invaders as the ultimate weapon. She emerges from the ruins of San Francisco and witnesses an amassing of surviving troops which becomes her support throughout her mission.

For more information about gameplay, proceed to the Gameplay Guide.

Black★Rock Shooter THE GAME possesses elements of both role-playing and third-person shooter genres. The player assumes the role of Black★Rock Shooter, the main character, and follows her battles against the alien forces, with occasional assistance from non-player characters.

In battle mode, Black★Rock Shooter's objective is to defeat the monsters within a set area. The player fights in real-time and in three dimensions, allowing Black★Rock Shooter to move across the battle area to maneuver evasively or position herself for attacks.

During a batte, the player is given an HP bar (health point/hit point; displayed in blue) which the player must prevent from reaching zero (the player's current HP will be overlayed on one side of the bar). Aiming at enemies is (by default) done by using the directional keys on the console. The game also provides a weapon energy bar located below the HP bar (normally displayed in green); this bar increases the more the player fires their weapon. If the bar fills, it will enter an overheat status (the previously-green bar will change to red with the words "OVER HEAT" overlayed on it); if this occurs, the player's weapon will become unusable until it cools down (the red overheat bar will steadily deplete during this time).

The amount of damage inflicted by the player on the enemies is displayed when the player's shot(s) contact(s) an enemy.

Like in traditional shooter games, the character receives experience from battles, a feature common to role-playing games. The character's progress is also based on levels, which denote the player's experience in battle.

The jrpg.jp domain, owned by Ryu's Office, which is then headed by Ryuta Kounuma (known for Valkyria Chronicles II and Persona 3 and Persona 4), released a teaser video on August 14th, 2010 after the release of the Black★Rock Shooter (OVA). The next day, a website was opened, with a promotional video and a tagline. Other details, including whether it is related to Ordet's OVA production, are unknown.[5] Meanwhile, there were no related news regarding the game posted in both the official site of the OVA and in Huke's blog site.

After the day of the conference, a new updated version of the official site for the game was launched, although the original teaser is no longer available, and news from the conference was added.

In an interview by Dengeki, Imageepoch's owner Ryoei Mikage confirms that they will release the game overseas, having a contract with NIS America, and that NISA will be releasing their titles in the US and probably also Europe.[6] Although the initial decision of NISA was considered as "still under consideration"[7], NISA finally confirms the release of the PSP game in North America and Europe.[4]

The game was released in a regular-edition set at ¥6,279 with a White Premium Box Edition Bundle version for ¥10,479. The official site posted that the game was to have a release date of March 27th, 2011, however, it was later removed due to unknown reasons. 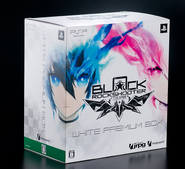