Dead (デッド, Deddo) is the incarnation of the Dead Master character, appearing in the Innocent Soul manga series. She is a senior Black Star who is registered as Black Star 012270.

Dead has the appearance of a female teenage adolescent (who appears somewhat more mature than Rock) with pale skin, green eyes, and wavy black hair. She wears a white sleeveless half-shirt, a black tie decorated with a star, a white skirt with a striped belt, claw elbow gloves, black leggings and black pumps. Her horns and pair of small wings are triangles.

Her weapon of choice this time is not her Dead Scythe, but a three-pronged sword.

It is presumed she beared a striking resemblance to Yomi Takanashi.

Dead's personality is quite childish, carefree and joking. Despite being a Black Star, Dead seems to have negative feelings to her job of collecting souls (saying that the purified souls disgusted her). When she fights she shows calm and wit that lets her use the lamentations of her enemies against them. She has a strange attraction to Rock, which is evident whenever she is around.

In her former life, she was a more sweeter person who loved her fiancé, and was possibly a somewhat forgetful person, judging by some of her lines in the penultimate chapter.

She is seen stalking Rock and Ron for unknown reasons. She later takes an unconscious Rock from the battlefield after fighting the soul of Hanako Nakamura. Dead thanks them for their effort and ate Hanako's soul, which astounded Ron.

Dead later wakes up next to Rock in a room and takes her on a tour of the place where purified souls are taken to Heaven. After reaching the area where souls are purified, Dead stole a soul and fled. She led Rock to a dungeon where they kept the souls of those who could not be purified and freed one of them. Rock started a fight, but strange memories flashed through her mind and left her helpless. Dead fights the hostile spirit and defeats the spirit, only to leave to places unknown afterwards.

Dead is later seen harassing a stagnant soul by the name of Kaede, and Rock and Ron confront her and drive her away. They find that instead of being relieved that the ravenous Dead is gone, Kaede has fallen in love with the tainted Black Star. Kaede's powers of illusion amaze Rock, and she wishes to see what other things love can do. On cue, Dead reappears to reclaim her prize, claming that the lost soul is "hers".

However, she is surprised when Kaede confesses love to her. Dead immediately reacts with disdain and decides to leave, but is stopped by Rock and thrown at Kaede, resulting in a collision. It is revealed through the collision that Kaede is in fact a girl. Angry and hurt, Kaede traps Dead in an illusory bottle, almost drowning her. Rock rescues her, and Dead discusses with Kaede, and they finally end up kissing. Kaede is devoured by Dead through the kiss, who then leaves, but not before telling Rock to "continue being delicious as you are".

Having died in a car crash in her former life, Dead was told by Ram that if she ate enough souls, she would be able to come back to life and reunite with her fiancé. When she learns this was a lie, she breaks down and becomes a stagnated soul herself.

As a stagnant soul, Dead's conscience faded into recollection of her former life, and began destroying the surrounding area, along with multiple Black Stars. As she attempted to attack Ram, Rock defended her, and fought Dead to bring her back to her senses. As her wings were blasted off, she came back to her senses, and explained to Rock about her former life with her fiancé, and how she cannot return because she cannot acknowledge her emotions, saying that she would've truly died. Immediately, she hugs Rock while allowing her Black Blade to kill her. As Dead dies, she states how she can finally see her fiancé again, and will always be with him. She finally disappears, stating her last words "I'm home", and allowing Rock to have her purified soul.

Unlike her other incarnations, she, like Rock, has the ability to cause a green flame to appear from her right eye. This is due to her being a Black Star.

As a stagnant soul, her enlargened skeletal wings on her back could be used as massive arms that could keep her high in the air, and also function as weapons to strike and crush her enemies. 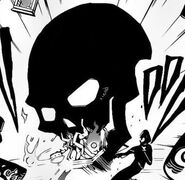