This article is about the weapon. For the character, see Death Scythe.

Dead Scythe is the weapon of choice used by Dead Master and all her incarnations except Dead.

Dead Scythe is a "jet-black" scythe. It has an unusually-shaped blade and a long, slightly-curved handle with vertebrae-like details similar to that of Dead Master's horns, and a flat bottom grip.

Dead Scythe's appearance has barely changed from its original concept, aside from having white highlights on the blade, and a bottom grip which now resembles Dead Master's horns.

Among all the redesigned weapons, the Dead Scythe had been the only one modified after a weapon from the Game. It now resembles White Rock Shooter's White Scythe while retaining some of its characteristics from its original design, along with extra green motif and more vertebrae-like details on the blade.

In the OVA, Dead Scythe was used in a battle between Dead Master and Black★Rock Shooter. It was wielded expertly by its owner, who used it in fierce slashing attacks on Black Rock Shooter. It was also used to throw chains at B★RS, but she managed to dodge and cut them with ★rock Cannon. During the course of the fight, Dead Scythe was shot and destroyed by the Rock Cannon; the head of the scythe broke off as a result of the shot, rendering the weapon useless. Annoyed but undaunted, Dead Master threw away the handle and resorted to fighting Black Rock Shooter with her skeletal claws and chains, which were possibly even more effective.

In the anime, Dead Master used it to fight Black★Rock Shooter in Episode 5. It demonstrated the ability to separate itself into links to form a deadly chain-scythe that was used to catch Black★Rock Shooter and throw her into a pillar and drag her down. 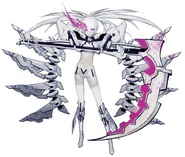 The Dead Scythe seems to be where the White Scythe of WRS is based from.
Community content is available under CC-BY-SA unless otherwise noted.
Advertisement