Dragon Slayer (ドラゴン退治, Doragon Taiji) or Solomon (ソロモン) is a character which is part of huke's Black★Rock Shooter concept. She is featured in huke's RMGD artbook, and also appears as a boss NPC in the game Puchitto Rock Shooter.

Dragon Slayer is a girl with golden/yellow pupils and long black hair. Her attire consists of a lace top under a bolero jacket, the former having a white strap crossed together as detail. She also wears a torn skirt which reveals part of what seems like a lace petticoat. She wears a gauntlet on her right arm and a black ring on her middle finger of her left hand. On her waist, a belt is attached. In some pictures, glasses can also be seen as one of her accessories. She is seen wearing a crown in a tilted manner.

Her weapon of choice is a twin-bladed, and a large two-handed broadsword with a small cross-guard.

There are two different depictions of Dragon Slayer. While she is shown with different attire and doing something different in each depiction, she is always shown holding a weapon (or in two cases, the Lemegeton).[1]

Dragon Slayer opening the Lemegeton after killing the first three devils in order to bring forth the other 69. 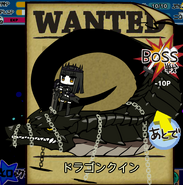 Dragon Slayer as she appears in Puchitto Rock Shooter