"Your power is of great interest to me. Say, do you mind if I take a closer look at it?"
― Elder Caster

Elder Caster (エルダ・キャスタ, Eruda Kyasuta) is an original character designed by Taiki introduced in the Android game Black★Rock Shooter Arcana. She is a denizen of the Arcana World as an Artifact, and is one of the five known characters who is accessible to the players of BRS Arcana.

Her role in the story is not that significant, and instead takes up the role of a sage who is turned to for her insights and her vast knowledge. She spends most of her time in a very prudent search of knowledge, and is noted for her impressive investigation skills, although she can get irritated at uninteresting things, and has a tendency to do things by impulse. She maintains a neutral ground in the happenings in the Arcana World in the midst of her constant quest to satisfy her natural thirst for knowledge, but she can choose sides when provoked to do so. 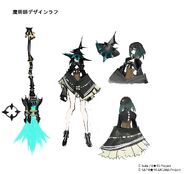