LLWO (リリオ, Ririo/Lilio/Lirio), is one of the Seven Apostles, ranked sixth. He is voiced by Hiroshi Kamiya.

LLWO's appearance is of a young man with dark complexion, silvery-white hair and pale green pupils. One unusual feature of LLWO is a black lightning-bolt shaped streak of hair that goes from the back of his hair to the other side. He, like Black Rock Shooter, has a scar on his upper torso, however his is on the right.

His main weapon is a bow which utilizes a special kind of ammunition, which is attached to his trousers.

In battle, he can be considered as an all-rounder, with strong points in long-distance attacks and in melee combats alike.

LLWO is generally a quiet, lone-wolf type of alien. He has a strong sense of pride, and will devote himself entirely to any prospect. However, he is very nervous and jumpy in MEFE's presence; he will agree to practically anything she says. This has a tendency to earn him cold scorn from her.

LLWO's characteristics do not change very drastically from the game, however his personality is slightly different; he is more mature and sensible, and is not as jumpy as he is in the game. He is first seen after MEFE's death, screaming wildly in the presence of the remaining Apostles; he then sets off to hunt Stella down. Upon finding her, he rages and attacks her, but Stella refuses to fight back; instead, she just apologizes. Eventually, he gives up, saying, "The you that killed MEFE is no longer here". When he, Nana and Stella witness WRS's Grateful Sun Ray charging for fire, Nana gives up hope, but Stella does not; LLWO takes a liking to her attitude and decides to join them on their quest. He is last seen in the boiler room that provides power to the Gratetful Sun Ray before it is destroyed. 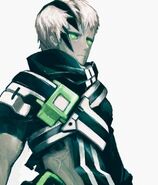