MEFE (ミー, Mii) is one of the Seven Apostles, a group of seven leaders of the invasion against Earth in Black★Rock Shooter THE GAME. She is classified as a Class A alien, and is ranked first in the Seven Apostles. MEFE is voiced by Mai Nakahara.

MEFE's appearance is of a young woman wearing a stereotypical outfit of a magician-class character in roleplaying games. She has short light purple hair and eyes. Her outfit is made up of a black shirt tied only at the point between her breasts, and is open in the back, closing below her shoulderblades. MEFE also wears light purple leggings and two belts, one of which is attached diagonally while the other is secured horizantally. MEFE's feet are slightly obscured by a pair of accessories consisting of a piece of pleated black cloth attached just below the knee with a belt each.

She wears a simple black glove on the left hand and a glove with metallic detail on the right; her other accessories include a choker with a blue gem pendant and a pointed hat adorned with a vertebra-like design.

MEFE's weapon of choice is a large violet axe with a red tip that looks like a clenched fist with a thumbs-up.

MEFE considers herself to be a refined lady. She is seductive, and is very confident in herself. She also enjoys anything that has relation to eating; throughout her extra missions, she makes a very big deal about a "full-course meal" and a "main dish". She also seems to enjoy trying new things; in her character episode, she suggests to the other Apostles implementing some human customs into the alien lifestyle, including events such as Christmas or Halloween.

She is particularly cold towards LLWO.

Her first appearnace is shortly after BRS awoke from the stasis chamber; she is seen sitting on a rooftop, watching the group from above. Later, she formally appears while Stella tries to remember what her name was; MEFE tells her that her name is "Gray". MEFE talks to her for a while, toying with her almost erotically; when PSS soldiers arrive and identify her as a Class A alien, Stella steps back while the soldiers lay down fire, but she shakes off their attacks without much effort. In her battle with Stella, MEFE appeared to have the upper hand until Stella activates Aggressor mode; she proceeds to cleave MEFE's arms off and then deal a mortal would across MEFE's neck.  As the troop turns to leave, they hear her calling out for LLWO. The soldiers, recalling their dead families, turn back and shoot her in the forehead.

The back view of Mii's outfit. 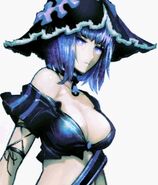