The true name for this realm has never been disclosed, and to aid in reference, will be called "Otherworld".

It is only shown to be a large expanse of land covered by grotesque features of land surrounded by an endless sea. From inside, it is composed of a variety of structures, with most buildings bearing a dilapidated, post-apocalyptic, and even desolate look to them. A striking feature of the structures erected in this realm is its dominant theme of checkered tiles in most of the floors and walls depicted.

Black★Gold Saw and Black★Rock Shooter fought here in the beginning of the OVA, where the former was victorious against the latter.

Dead Master stays inside a structure similar to a cathedral complex located in the middle of a large depression, surrounded with winding passageways from outside. The area is surrounded by a large cemetery, which is shrouded in a thick mist.

Black★Rock Shooter starts here at the beginning of the anime. The area matches the decor of the Otherworld in general and has pointed, deserted stones everywhere.

Chariot seems to reside here. The pink-tinted area (rather than yellow-tinted) is full of robotic, toy-like creatures that have claws and drills. The background resembles a toy area with baby doll faces and colored blocks.

Inside is a house that floats in the air, suspended by strange string-like objects. Dead Master was dragged here by what was presumably Chariot's minion bugs and chained. Only a single doll covered this up.

A grey-tinted area (rather than red-tinted), which seems to have ruined Greek-style columns, and multiple chains spread around.

A separate, grey-tinted area which is a vast expanse of land with chains in the sky, and a large hole leading to an abyss where many bodies of dead other selves lay in.

Strength was shown dragging the beheaded body and head of Chariot here, then throwing her into the abyss. She later dragged the body of Dead Master away from Insane Black★Rock Shooter and Black★Gold Saw's fight, presumably to bring her to this area.

The strange, green-tinted place where Dead Master was chained might be her lair. In that place, there lies a hidden throne where the Dead Master sits for the duration of time while Black★Rock Shooter fought her skeletal minions. Skeletal columns and Greek-style pillars are scattered about and the entire battlefield has a green tinge.

Covering the floor of some parts of the battlefield is a strange, greenish liquid.

Strength's field is like that of an orange rubix cube surrounded in gigantic barbed wire. She can easily change her position on the cube by slamming her fists in one of the blocks. She can easily move through the field from jumping or climbing from block to block. It also seems to react to her emotions for when she starts to go insane the field is engulfed in flames.

According to Mato and Insane Black★Rock Shooter, this is Black★Rock Shooter's world. However, she is never shown to actually reside here. The world is a wide, empty space with some ruins embedded in the floor. The ground has the typical checkerboard pattern of most locations in the Otherworld, but with a blueish tint. The entire battlefield seems to be surrounded by a black-blue rocky material that prevents those inside it from seeing the outside world. This battlefield resembles a cavern or a large hall. Unlike most of the other battlefields, it is practically empty except for some large, spiky objects stuck in the ground.

Black★Gold Saw's battlefield in the OVA.

Dead Master's lair in the OVA. 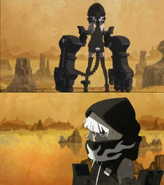 Strength in the Otherworld's "Desert Area" in the OVA

Dead Master's battlefield in the anime.

Another view of Black★Rock Shooter's battlefield.

Black★Gold Saw's battlefield in the Anime
Community content is available under CC-BY-SA unless otherwise noted.
Advertisement