Puchitto★Rock Shooter: Pursue the Mystery of the Sexy Planet

Edit
watch 01:25
Jurassic World: Dominion Dominates Fandom Wikis - The Loop
Do you like this video?
Play Sound
This article is about the Puchitto iPhone game. You may be looking for other uses of Black★Rock Shooter.

Puchitto★Rock Shooter: Pursue the Mystery of the Sexy Planet

Puchitto★Rock Shooter: Pursue the Mystery of the Sexy Planet (ぷちっと★ロックシューター セクシー惑星の謎を追え！, Puchitto Rokku Shūtā Sekushī Wakusei no Nazo wo Oe) was a free-to-play action puzzle game developed by Imageepoch in partnership with GOOD SMILE COMPANY for iPhone. It was a successor title to Puchitto★Rock Shooter browser game.

The game was released to Apple's App Store on September 7, 2012.[1] In April 2015 the game became inaccessible as game's user data disappeared together with its official website without prior announcement.[2]

At the edge of the universe lies a group of hot spring planets, and it is said that treasures is hidden somewhere out there. However, each planet is home to cunning monsters and sexy boss enemies, and it is up to the player defeat them and find the treasure.[1]

The player controls a game character (whose default appearance is that of a chibi Black★Rock Shooter), whose goal is to eliminate all enemies on each stage with limited ammunition. Similar to Angry Birds, the player sets the weapon's angle and projectile's speed by tapping and dragging on the game character, and fires the weapon by releasing afterwards.

Each planet features five stages, with the fifth stage hosting a boss whom the player must defeat by hitting the weak spot in order to progress to the next planet.

Clearing a stage rewards the player with weapons, gold (in-game currency used to purchase other items), or avatar items (cosmetic customization). There are also Puchitto aliens that the player can shoot on each stage as optional targets to obtain bonus gold or avatar items.[3][4]

Customization includes player character appearance, weapon, and ammunition loadout. Players can purchase items under "Normal Item" section with in-game currency, while those under "Premium Item" can only be purchased with real money.[4] 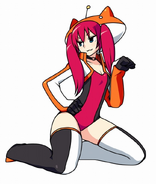 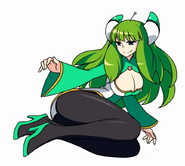 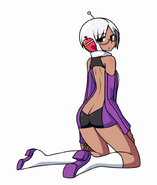 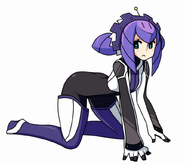