Black Star
Rock (ロック) is the incarnation of the Black★Rock Shooter character appearing in the Innocent Soul manga. In Innocent Soul, she is a Black Star who is registered as Black Star 01451. Her role along with her constant companion Ron is to capture stagnant souls which are souls that have not ascended and run amok across the surface of the Threshold.

Like her other incarnations, Rock takes the appearance of a blue-eyed, pale-skinned teenage girl with long black hair tied in uneven spiky ponytails, with the right being shorter than the left. At will, a blue flame appears from her left eye. Her garments consist of a black poncho with black or red fur around the neck area with a white star near the left shoulder and a larger star in the middle of the back. A white line goes through the star on the shoulder and around the rims. The poncho is also lined in a black stringy lace. Under the poncho, she wears a short white or yellow dress with a puffy skirt that has two black horizontal stripes on the chest area. She also wears a buckled black belt around her waist. Additionally, she wears black thigh-high boots and has blue fingernails.

In the penultimate chapter of the manga, upon gaining Dead's purified soul and the resolve to fight Ram, her clothes become that of her original concept's, albeit without the scars.

Her weapons of choice are her ★rock Cannon and her Black Blade, which are summoned through the shape-shifting powers of her companion Ron. She is later able to summon Dead's three-pronged sword and multiple ★rock Cannons to surround herself with.

Although she is considered to be an entity whose purpose is to capture and surrender souls, Rock is shown to have a kind personality towards the inhabitants of the Threshold. However, she suffers from a traumatic event that can make her lose control of herself when certain triggers are encountered (e.g. fire and the word "disappear"). Rock at times empathize with souls stuck making her feel guilty for killing them. She friends with Dead throughout the series, and later grow strong affection to her, seeing her cry when killing Dead to release her from pain. She also has an rather intimate and somehow romantic relationship with her companion Ron.

Before arriving in the Threshold, Rock was originally a high school student who possessed a carefree personality. She has a habit of visiting a snack shop near the school where she studies in and among her favorite food is melon bread. However, she was a victim of being bullied by her schoolmates, and in one of her encounters with her bullies, she was pushed down a flight of stairs, leaving her with grave injuries.

She would experience the rest of her life bedridden in a hospital, where she would be left without her parents to watch out for her. It is very likely that it stayed that way until her death.

In the first chapter, Rock and Ron met a guy named Ret and his sister Io. They explain to Rock, that this city is a ghost town because of a serial killer called "Jack". Hours later, Io escaped to get Rock flowers, but then she is attacked by Jack. Rock and Ret are separated to search, but Ret was also attacked by the spider-monster, Jack, a few minutes later. Rock had a duel in which she defeated Jack. Ron then explained to Ret and Io that they were actually in the "Hazama" and that the souls of all victims of Jack were drawn into that city by the desire to Jack feel death. After the city disappears Rock and Ron continue on without knowing they were being watched.

In a new mission, to go to a illusion of a school, Rock and Ron inspected when she fell over a draft and meet Hanako Nakamura. She gives them a tour of the entire school at the end of Ron and Rock were already up going but she stopped them and showed a film showing the abuse at school, for some reason this crazies Rock and starts a battle between ambas. Nakamura crushing Rock achievement and continued talking about his resentment, Rock manages to react and release and destroy Hanako's headphones, making the voices in his head to let her outside immediately combate.Then Rock stabs Hanako.The school disappeared and  Rock fainted but was found by Dead who stole the soul standing alone.

When she awoke she was in the room of Dead, who explained what had happened and gave Rock a tour of the facilities. Passing through the gate into the sky, Dead suddenly theft a stagnant soul and fled. Rock and Ron chased Dead to  the dungeon where Dead Souls Skull attacked them and releasing a stagnant soul who fought against Rock, but to be overwhelmed by their past memories was defeated soon. Rock was saved by Dead who left her unconscious on the floor.

In a new mission, with Acta and Nico, Rock and Ron went hunting the soul of an intense battle tiger. In the battle, Acta was killed by the tiger to save Rock, she took her chance and shot the tiger finishing it once and for all. Rock attempts to save Acta but was useless and was forced to face the reality of a Black Star.

Rock and Ron escorted Nico to a warehouse to select its new Black Star. Rock felt bad for Nico's comments and was followed by Ron. While walking she met a woman singing. The stagnant soul attacked Rock realizing her presence. Rock was lost until she was rescued by Ram, who told her that if she surrendered, she would become a stagnant soul. Rock returned to the fight that was too much for her to make sure Ram's safe.When Ram was about to kill the soul Rock stopped her to be aware that she just wanted to hear her singing. Rock takes of Ram of the hole and listened until the girl disappeared and Rock decided that she was going to recover her memories.

In a new mission Rock and Ron went to a frozen wasteland, with a new soul. There they met Cecil and when she was being attacked by her mother, Rock stopped her. Ron lied to Cecil into believing that he was a puppet and Rock was his puppeteer to not cause rampage. Following a failed event, Rock continued speaking as Cecil felt, until Cecil's mother came in and started beating her to death. Cecil suddenly rewinds the world to appear before Rock. Rock believing that the mother was the stagnant soul she was going to kill the mother but she was stopped by Cecil , resulting in revealing that Cecil was the stagnant soul. Rock reasons with her ​​pointing out that just had to express his feelings to her mother, thus breaking the illusion. 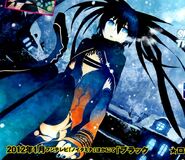