Start a Wiki
Ron (ロン, Ron) is a character in the Innocent Soul manga. He is Rock's constant companion throughout the story.

Ron comes in the form of a snake-like creature with no discernible eyes. He has a long black body with a white stripe along either side and a prominent snout. He has a jagged ridge running along his back.

In his human form, Ron is a teenage boy wearing a dark coat and pants. He wears a hat that has jagged ridge design similar to his snake-form.

Ron is shown to be able to float and slither through the air, a little like a dragon. However, his most important ability is to transform into Rock's two weapons - a large cannon and a curved sword. He can transform at will or when Rock makes him.

He may be able to transform into other useful objects as well; he turned into a baseball bat in order for Rock to swat away one of Dead's skull minions. Other transformations he can undergo remain to be seen.

Ron also can become two guns at once. As allures of Rock will have increased power as a weapon.

Ron seems fond enough of his partner, Rock, and has a very intimate relationship with her, even seemingly having romantic feelings towards her. This is shown when he does not want to replace Rock with a new partner despite her instability or when he willingly used his body to protect Rock from Ram's attack. He can be quite a joker but he gets serious at the right time. He is not above using foul language, especially when his frustration mounts.

He appears to have a good battle sense and knows when to stand down or attack as the situation calls. He sometimes warns Rock of danger or imminent attacks which she cannot detect.

Ron is part of the Army of Black Shooters. He is one of a variety of "companion-weapons" to the Black Shooters that accompany them on operations and serve as their weapons. 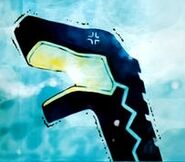 Ron in his human form

Ron and Rock
Add a photo to this gallery
Retrieved from "https://blackrockshooter.fandom.com/wiki/Ron?oldid=13583"
Community content is available under CC-BY-SA unless otherwise noted.