Nana Gray (sister)
Stella is the incarnation of the Black★Rock Shooter character who is the main character of the PSP game Black★Rock Shooter THE GAME. She is a "living weapon" given the code name BRS, and was designed to combat the alien forces that invade the Earth in the near future, and becomes part of the sole resistance force that fight against the invaders.

Stella takes the appearance of a blue-eyed teenage white-skinned girl with long black hair tied in uneven ponytails, with the right being shorter than the left. During battle a blue flame appears from her eye in order to increase the power of her attacks and activate abilities. Around her neck is a pair of dog tags, has a black string bikini top and she also has two scars on her midriff that resemble barcodes.

Stella has two canonical outfits throughout the course of the game.

Her first outfit is called "Normal Suit" (ノーマルスーツ, nōmaru sūtsu), which is the default outfit for Grays. She wears a black suit with a white stripe down both sleeves for the arms (while none for the legs) and the logo of the UEF-PSS on her left shoulder. Additionally, all-black gloves can be seen at the end of the sleeves. The suit is partly opened showing certain portion of her bikini top and below the suit, various pouches affixed to it. She wears black boots with a similar pattern to her jacket and a pouch on her right thigh.

Later in the game, with the original outfit heavily damaged, she obtains new clothes called "Booster Unit" (ブースターユニット, būsutā yunitto) from Nana Gray, which has a small jet engine affixed to a pair of mechanical wings mounted on the lower back of her opened up jacket, a pair of black bikini bottom-like shorts. This outfit grants better heat management during evasive manuveurs in-game.

She also possesses 2 weapons, the Black Blade and the Rock Cannon, which can both be upgraded to grant BRS more firepower and slashing capabilities. They have different designs than the previous weapons she had.

At the start of the game, Stella is rather silent and inexpressive, speaking very little aside from questions and responses. At this point, she appears to have low memory capacity, as things that are most obvious to most people (I.E., handshakes) are unknown to her and must be demonstrated for her.

As she bonds with the rest of the PSS members, she begins to become more interactive and sociable; she is noted to become more talkative with both friend and foe alike. As she develops more of her emotions, she begins to display a greater concern for her allies. She also discovers a more playful side, such as deliberately flying the Brunhilde improperly when Rothcol poked fun at her for smiling. At the end of a mission in Moscow, she risks her life to save a can of cherries from XNFE's attack, as it was a last memento from Rothcol.

She was born on 22nd September 2035, and was named Stella by Professor Gibson. Gibson, who had abandoned everything else he had worked for, took Stella with him and fled from his research facility in Russia 3 days later and went back to live in San Francisco.

Knowing that Stella would suffer the same flaw of deteriorating memory as the past clone soldiers, Professor Gibson later began his research to help preserve Stella's memory from an external device. With help from his techicians, he successfully made a stasis tube that would help Stella increase physical strength while retaining her memories. Professor Gibson decided to contact the UEF and formally announces Stella's existance, considering her as the last hope of mankind.

Stella was confined to the stasis tube at the age of 6, despite her refusal. Project 12 was announced, with the plan of having Stella to stay in the tube for 12 years so she would be prepared to fight the aliens.

However, in 2051, the aliens began their 3rd wave of invasion with numbers of Armaments greater than the first two. On the 25th of September, the remaining 12 UEF members, who were also the last men on Earth, woke Stella 3 years earlier than planned due to the urgency of the situation.

Stella is one of the last residents on a dead Earth, joining the last stand of the remaining forces of Earth to fight against beings called the Seven Apostles. She is considered to be the ultimate weapon, whose abilities are the only hope to save Earth from utter destruction.

NOTE: All names are from the English release of Black★Rock Shooter THE GAME and may differ from the JPN release.

Stella's characteristics barely change at all in the manga; the only difference is that her emotions are slightly intensified.

A younger Stella lying down. 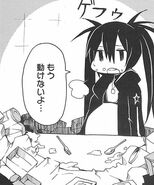