XNFE (ナフェ Nafe) is one of The Seven Apostles, a group who leads the attack against the human race in Black★Rock Shooter THE GAME. She is ranked fifth.

XNFE is a girl with short pale pink hair and eyes. She wears a blouse with a large collar and has it mostly open, revealing a pair of black-and-pink striped straps which cover her breasts. She also wears a very short skirt and two pink-and-black striped belts crossed together. XNFE also wears a pair of high heeled shoes with crossed straps.

She wears a large headpiece covering much of her head, and on that headpiece are two metallic accessories shaped like bunny ears.

XNFE's arms are two unusual metallic contraptions which have three-pronged claws on each end.

XNFE is very haughty. She hates things that are cuter than her, stronger than her, or anyone that talks badly about her. However, she loves cats.

It is hinted that she considered fighting WRS. However, SAHA advises her against it, even if she were to neblade the White.

XNFE's personality does not change very much from the game; she is still childlike and haughty. However, it is revealed that she bears strong resentment towards WRS on a personal level; she, SZZU and CKRY were plotting to revolt against her, and it is hinted that XNFE was the one who ordered the two to "dispose of" MZMA.

When XNFE was first recruited for the Apostles, WRS found her homeless and sitting in a garbage dump, covered by a threadbare blanket and humming to herself insanely. XNFE, in truth, has issues with loneliness; she used the garbage around her to create the rabbit drones she's commonly seen with (she later addresses them as the "Chibi"), and when she introduces them to WRS, she calls them her "friends". WRS was impressed with her skill, and takes advantage of XNFE's loneliness by saying that if she went together with her to a "new world", she'd be able to make lots of friends. 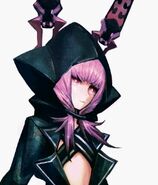 XNFE portrait.
Add a photo to this gallery
Retrieved from "https://blackrockshooter.fandom.com/wiki/XNFE?oldid=13615"
Community content is available under CC-BY-SA unless otherwise noted.